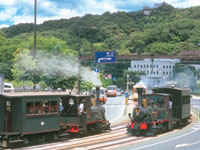 In service throughout the year

This train was described in Soseki Natsume's novel Botchan as being like a matchbox. Since resuming service in October 2001, the streetcars are once again running through the city of Matsuyama.